As a born and bred Hongkonger, Christmas to me has always been a time to remember and celebrate the birth of Jesus Christ and to spend time with family and friends.

When I was a child, Christmas was always a joyful time. We could not wait to visit Santa Claus at one of his conveniently located grottos in a department store to tell him what we wanted for Christmas. However, I did often wonder how Santa Claus came to be associated with Christmas, since there is no mention of him in the Bible. Honestly, I did not really care that much, so long as I got my Christmas gifts. This is true for many people as Christmas would not be the same without this important custom of gift giving.

I must admit up until recently when we started planning our winter workshops, I had assumed Santa was the only bringer of gifts at Christmas. Then I discovered to my pleasant surprise that there are many other Santa type figures in different countries and cultures around the world who also visit children at this time of the year. In Russia, for example, they have ‘Baboushka’, an old lady who travels to different villages in search of the baby Jesus, leaving small gifts for the sleeping children in the homes she visits.  In Italy they have ‘Befana’, another old lady, but dressed in black riding a broomstick (She is not a witch!) who drops sweets for good children and coal for bad children. In

Austria, Switzerland, Germany, Croatia, the Czech Republic, Liechtenstein, Luxembourg, they have  Christkind, a sprite-like child, usually depicted with blond hair and angelic wings who visits homes and leaves toys for small children.  Other noteworthy givers of gifts include Pere Noel and Ded Moroz, who like Santa Claus, have evolved into various Christmas figures inspired by the generosity of St. Nicholas.

One of my favourites though is the Los Reyes Magos (The Three Wise Men or Three Kings) because they relate more to the story of Jesus. They can be found in Spain and other Hispanic/Latin American countries. The Three Wise Men are unique because, unlike in most countries, they take center stage over Santa Claus during the festive season. In 2015, a study carried out by the Spanish toy maker association (AEFJ) found that 66.87% of Spanish children preferred the Three Wise Men, while 27.48% preferred Santa Claus as their favoured gift giver.  Another difference in Spain is that children only receive small gifts on Christmas Day as they have to wait until the 6th January for their ‘big’ gifts. This could explain why Spanish children choose the Tres Reyes over Santa!

In Spain, the tradition of Día de Reyes is still closely followed. It is not only for children, since adults also like to join in the fun and excitement waiting for the Fiesta de Los Reyes Magos (Festival of the Three Wise Men) on 6th January. This date in the Christian world is more commonly known as the Epiphany. 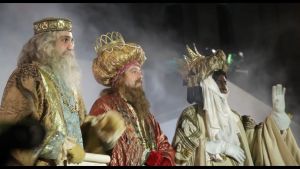 It marks the biblical story of the three Magi (‘The Three Wise Men) – Melchior, Caspar and Balthazar from the East — who, guided by a star, found baby Jesus in Bethlehem and brought him the three symbolic gifts of gold, incense, and myrrh. For this reason, when Christmas approaches, children begin to write letters to one of the kings (or to all three) telling them how well they have behaved and saying which presents they would like to receive.  Then they can either give the letter to the Wise Men personally when they arrive “officially”, or to the Royal Postmen that can be found in the centres of all Spanish towns.  Children will be asked if they have been good at school and at home. Naughty children will only get coal instead of presents. However, this is not as bad as it sounds since the ‘coal’ is made of sugar and therefore is a sweet treat form of ‘punishment’.

On the 5th of January, whole families come out onto the streets to receive the Magi. Since the 19th century, Spanish towns and cities have enthusiastically embraced the colorful parades of the Dia de los Reyes — a celebration of the arrival of the three wise men in Bethlehem after the birth of Jesus. You can often find floats with effigies of each of the Three Wise Men in the parade, played by members of the local council. The various parades are usually very big and colourful, snaking their way through the main streets with lots of sweets thrown out over the crowds. It is also not unusual to see adults joining in the fun with upturned umbrellas trying to catch as many sweets as possible.

After the parade, children go to bed early on the night of the 5th and excitedly wait for Melchoir, Caspar and Balthazar to come through their window and leave presents in their shoes.  For Spanish families, January 6th is an important public holiday. People and families everywhere come together in the morning to watch children unwrap their presents.  There is normally another big family meal which is not complete without the traditional Roscón de Reyes cake – a circular sweet bread sprinkled with sugar and dried fruit on top.  Embedded inside is a plastic little king or queen and whoever finds it is monarch for the day.  A bean is also hidden inside the cake and whoever gets it has to buy the Roscón next year.

This year at Immerse Languages Institute, we have prepared a special Christmas Los Reyes Magos workshop where students can experience this Spanish tradition.  They will be able to write letters to the Three Wise Men in Spanish, play fun games, join in various activities and get a real taste of Roscón de Reyes.  What’s more, as we have sent a letter to the Three Wise Men telling them about our workshop, they might add us to their itinerary and make an appearance on January 6th laden with gifts for children!

For more details of this and other exciting programs, please check out our website 或 social media page and contact us for more information.  We wish you all a very merry Christmas and a happy new year!!