You are here: Home1 / Culture2 / 尋找中秋節的文化 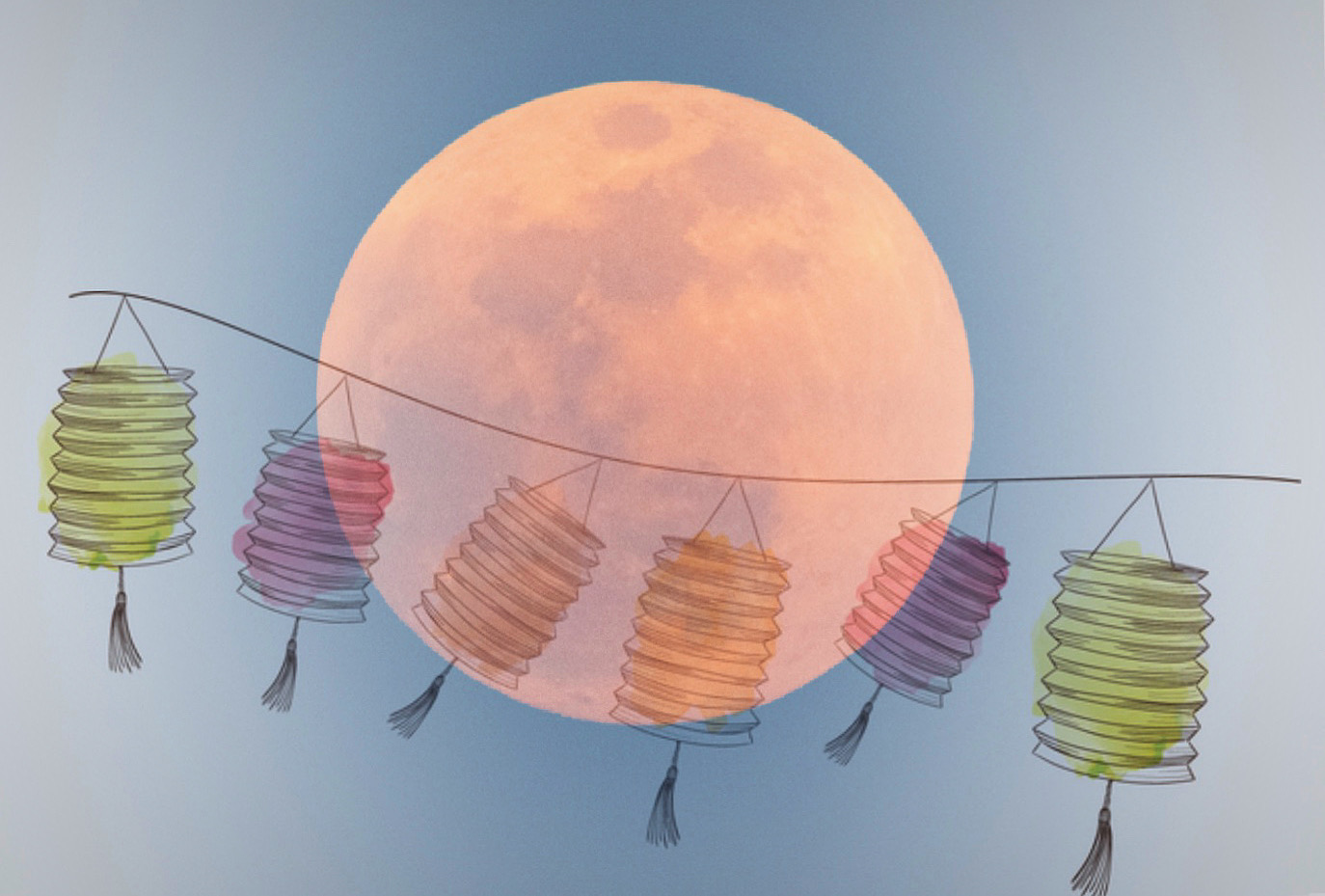 Origin and Spread of the Mid-Autumn Festival

There are various accounts on the origin of the Mid-Autumn Festival. The Mid-Autumn Festival originated from the worship of the moon in ancient times, which has a long history. The term “mid-autumn” (中秋🔊) first appeared in 週禮, a written collection of rituals of the Western Zhou dynasty (1046–771 BCE). The festival is held on the 15th day of the 8th month of the Lunar calendar, which is the middle month of the lunar Autumn, with a full moon at night, corresponding to mid-September to early October of the Gregorian calendar.  In addition, among the four seasons of the year, each season consists of three parts, “Meng, Zhong and Ji”, so the second month of autumn is called “Zhong Qiu (Autumn)”. It is also known as “Reunion Festival”, and “August Festival” and etc.. As early as the Zhou Dynasty, there were activities of “Greeting the Coldness at the Mid-Autumn Eve” and “Worshiping the Moon at Autumn Equinox”.

On this day, the Chinese believe that it is the best time to appreciate the moon, when it is at its brightest and the fullest; when the temperature is cool and the sky is clear.  Coinciding with harvest time, therefore, people held ceremonies and activities to celebrate harvest and extend gratitude to the mother Earth. Later, sacrifice to the moon was gradually replaced by the appreciation of the moon and the celebration is retained and endowed with new meanings. The celebration of Mid-Autumn became an official Festival during the early Tang dynasty (618–907 CE).

The traditional Mid-Autumn Festival in Japan is called Tsukimi (moon-viewing day) (つきみ) in Japan, known as じゅうごや🔊 in Japanese. In the past, people paid tribute to the Nature god with rice dumplings, miscanthus, taro, edamame, and nectar to express their gratitude for the harvest. In South Korea, Chuseok (추석🔊 ) is one of the most important local traditional festivals and is celebrate until now. On this day, people would pay respects to their ancestors at their tombs with freshly harvested grains, visit relatives and exchange gifts of their hometowns.  Hence, Chuseok is also called “Korean Thanksgiving Day” in English.  Tết Trung Thu🔊  in Vietnam has evolved into a children-oriented festival.

Customs and Food Culture of the Mid-Autumn Festival

As mentioned above, “Worshiping the Moon at Autumn Equinox” was recorded in The Book of Rites, indicating that activities “Greeting the Coldness” and “Sacrifice to the Moon” would be held each night of the Mid-Autumn day.  Later, the sacrifice to the moon was gradually replaced by the appreciation of the moon.

As for mooncakes 月餅🔊, it is said that eating moon cakes had become a custom as early as during the Tang Dynasty. According to legend,  envoys led by Zhang Qian, under the reign of the Emperor Wu of the Han Dynasty, introduced sesame and walnuts from the Western Regions. People made round cakes with fillings of walnut kernel, called “the hú (胡) cake”. According to Chinese folklore, on the fifteenth day of the eighth lunar month, Emperor Xuanzong of Tang and his wife Lady Yang was eating “hú cakes” while enjoying the moon, and Lady Yang, out of the intention to ingratiate herself with the emperor, called the cake as “mooncake”, which name had been spread throughout the country since then.

We, the Chinese, are obsessed with the auspiciousness “reunion” conveyed by the Mid-Autumn Festival. In addition to the Spring Festival, glutinous rice balls (Tang Yuan 湯圓🔊) are also eaten on the Mid-Autumn Festival for its implication of sweetness and reunion. Glutinous rice balls are quite similar to tsukimi dango (つきみだんご 月見糰子🔊) of Japanese, which are all white glutinous rice balls. As its name implies, “Tang” of Tang Yuan means soup, either brown sugar or ginger is used to cook sweet soup base, and the fillings are dominated by crushed peanuts, sesame paste and red bean paste. Without fillings, Japanese rice balls are coated with dressings such as bean powder, black sesame, white sugar or peanut flour after boiling. To me, tsukimi dango つきみだんご is more similar to Tang Bu Shuai (Glutinous Rice Balls with Peanuts & Sesame), a common snack in Hong Kong. On the other hand, Koreans don’t eat mooncakes. Instead, they have half-moon-shaped Songpeong (송편🔊), as they believe that half-moon means turning from crescent to full and full-moon means the abundance and fullness.  So, they make it half-moon-shaped to signify progress, development to perfection. There are two types of Bánh Trung Thu🔊 (mooncakes) of Vietnamese, one is similar to baked Chinese mooncake, and the other is soft mooncake made of white glutinous rice. Its fillings and styles are rather diversified.

Pomelo 柚子🔊, a traditional fruit option for the Mid-Autumn Festival, is auspicious as it is the homonym of “Bless You 佑子🔊”! In the dialect of Nanchang, pomelo is similar to “Have a Baby 有子🔊” in pronunciation, symbolizing “May You have a baby soon”. In addition, pomelo is also the homonym of “Wanderer 遊子🔊”, as ancient wanderers would eat pomelo at the Mid-Autumn Festival to express their thoughts to their hometown and relatives.

In ancient times, lanterns were mainly used for illuminating and were regarded as a symbol of happiness

and reunion. Lantern 燈籠🔊 culture emerged in the Western Han Dynasty of China, carrying the lantern around became a custom of the Mid-Autumn Festival only since the reign of Taizong of the Tang Dynasty. A folk ballad reveals its purposes in festivals: “Playing with lanterns on the fifteenth day of the first month of lunar year, hanging red lanterns on the Dragon Boat Festival in May, launching sky lanterns at breezeless day in June, enjoying lotus lanterns on July fifteenth, rabbit lanterns on August fifteenth and Kongming Lantern on September Ninth.”

Lantern Riddles 打燈謎🔊, a unique form of ethnic-style entertainment, were developed from riddles. In the past, people wrote riddles on papers and pasted them onto colorful lanterns and other people tried to guess the answers, this custom started from the Southern Song Dynasty.

Chang’E Flying to The Moon

When Hou Yi returned home and learnt what had happened. Overwhelmed with anger, he wanted to kill Peng Meng, but the latter escaped long before. Filled with grief, Hou Yi looked up to the night sky and called out the name of his beloved wife. Later, as instructed by an immortal, when the moon was round and bright on Fifteen of August of Lunar Calendar, he would have an incense table arranged at the back garden, use flour rolling into moon-shape cake, and put on Chang E’s favorite fruits. Chang E really returned and reunited with him. From then on,  the custom of worshiping the moon on the Mid-Autumn Festival became widespread and the flour ball evolved into a great variety of mooncakes later.

Finally, I would like to talk about the culture of poems about the Mid-Autumn Festival. Throughout the ages, countless literati and poets have created numerous famous works on the Mid-Autumn Festival, making the festival aesthetic and romantic. The harvest moon is exceptionally bright! “People today cannot see the ancient moon, but the present moon once shone on the ancient people” of Li Bai, “The bright moon shines over the sea, from far away we share this moment together” of Zhang Jiuling, and “Tonight, people are enjoying the bright moon in the sky, but I don’t know the endless thought for the autumn fell in whose home” of Wang Jian of the Tang Dynasty, as well as “Now that the spring breezes have reverdured the south bank, when will the bright moon see me on my homebound way?” of Wang Anshi of the Song Dynasty have been read through all ages. How many ancient poems about the moon do you know? For learning more, please feel free to contact Immerse Languages for Ms. Sun, who is a teacher with abundant knowledge in the Four Books and Five Classics and verses, ditties, odes and songs of China.

*Recording of Chinese characters are in Cantonese