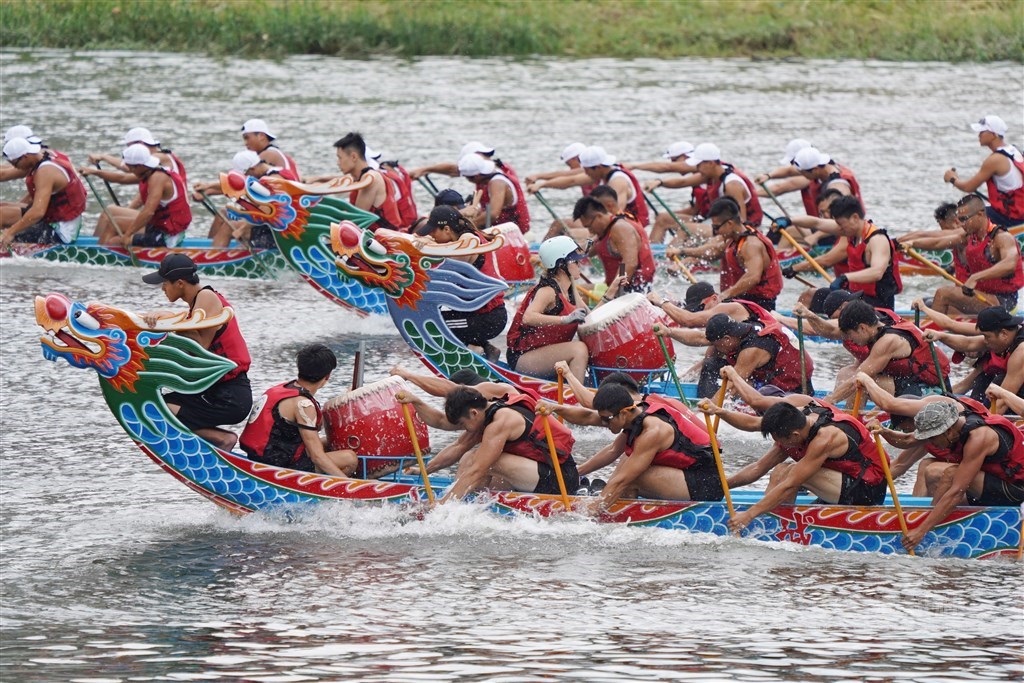 Today is Tuen Ng (Tuen1 Ng5 | duānwǔ in Putonghua pinyin), more commonly known internationally as the Dragon Boat Festival!  It Is a traditional holiday which occurs on the 5th day of the 5th Chinese lunar month and is one of the four major festivals celebrated in Chinese culture, along with the Chinese New Year, Mid-Autumn Festival and Ching Ming.

“Wu” or “Ng” refers to the sun at its highest position in the sky during the day, the meridian of ‘high noon’. “Duan” or “Tuen” refers to upright or directly overhead. Therefore, Duan Wu is an ancient reference to the maximum position of the sun in the northern hemisphere, the longest day of the year or the summer solstice.  The sun is considered to be at its strongest around the time of summer solstice, as the daylight in the northern hemisphere is the longest. Actually, Chinese people have a saying which means only after eating the rice dumpling on Tuen Ng Festival could we put away winter’s clothing (未食五月糭，寒衣不入籠).  Hence, Tuen Ng is a day that marks the advent of Summer.

Dragon boat racing has its roots in an ancient folk ritual of contending villagers, which dates back 2,500 years, during the Warring States Period (402-221BC) throughout Southern-Central China, and even further to the original games of Olympia in ancient Greece. It has a rich history of ancient ceremonial and ritualistic traditions originated among fishing communities to appease the rain gods, encourage rainfall and celebrate the summer rice planting.

Yet, dragon boat racing is most well known to be associated with and to commemorate the death of the famous Chinese scholar Qu Yuan (屈原 340–278 BC).  Born into a noble family in the State of Chu during the Warring States Period (475-221 B.C.), Qu Yuan first served as a high-ranking official responsible for internal and diplomatic affairs in the ancient state of Chu.  Unfortunately, he was exiled from his state by a corrupt king.  During his exile, Qu Yuan wrote a great deal of poetry.  Twenty-eight years later when he heard that his court had been destroyed by enemies, he drowned himself in despair in the Miluo River.

Upon hearing such tragic news, villagers took the boats and drums out to try to rescue him, but their efforts were in vain.  They turned to beating drums, splashing water with their paddles and throwing rice dumplings into the water which serves as both an offering to Qu Yan’s spirit and to keep the fish and evil spirits away from his body.  These rice dumplings developed into the zongzi (粽子) we know today. This is said to have been the origin of dragon boat races.

As we have seen in the above, it’s impossible to talk about the Dragon Boat Festival without mentioning Qu Yuan.  Qu Yuan is not only the first patriotic poet but is regarded as the first author of verse in China to have his name attached to his work. Prior to that time, poetic works were not attributed to any specific authors. He is considered to have initiated the “sao” style of verse which is named after his work Li Sao (离骚 – lí sāo), in which he abandoned the classic four-character verses used in poems of Shi Jing and adopted verses with varying lengths. This resulted in poems with more rhythm and latitude in expression. Qu Yuan is also regarded as one of the most prominent figures of Romanticism in Chinese classical literature and his masterpieces influenced some of the greatest Romanticism poets in the Tang Dynasty (618-907 AD) such as Li Bai. Hence, He is also regarded as the Father of Chinese Poetry. 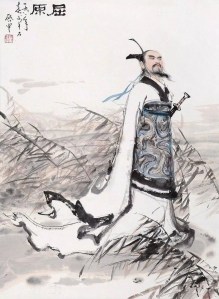 His most famous work is Li Sao (离骚 – lí sāo), which means “Encountering Sorrow.” This is a part of the anthology known as Chu Ci (楚辞 – chǔ cí), the “Verses of Chu.” Li Sao is considered to be his magnus opus.  In this famous poem, Qu Yuan laments the corruption that has cursed his kingdom and resulted in his banishment. He expresses his desire and determination to uphold righteousness and purity despite the corruption that surrounds him. The poem uses a lot of vivid imagery and metaphors related to a type of Chinese shamanism. It’s not an easy read, but it sure is an interesting one!

Other works include “Jiu Ge” (九歌 – “Nine Songs” or “Hymn to the Fallen”) – a collection of songs used in ancient shamanistic ritualistic dramas, and “Tian Wen” (天問 – “Questions to Heaven”) which is characterized by 172 questions put to the heaven.  Jiu ge represents the most remarkable textual evidence for the early Chinese tradition of southern Chu shamanism.

If you have interests about Qu Yuan and his poetry, you may learn more in this link.

Qu’s literary legacy has influenced many subsequent generations in China and beyond. He was listed as one of the world’s four literary celebrities by the World Peace Council in 1953, the other three being Francois Rabelais, Nicolaus Copernicus and William Shakespeare.

A notable and inseparable part of celebrating the Dragon Boat Festival is making and eating zongzi with family members and friends. People traditionally wrap zongzi in leaves of reed, bamboo. The leaves also give a special aroma and flavor to the sticky rice and fillings. 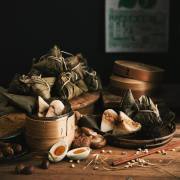 There are mainly two tastes to zongzi: sweet and savory. Choices of fillings vary depending on regions. Northern regions in China prefer sweet or dessert-styled zongzi, with bean paste, jujube, and nuts as fillings. Southern regions in China prefer savory zongzi, with a variety of fillings including marinated pork belly, sausage, and salted duck eggs.

The shapes of zongzi vary and range from being approximately tetrahedral (pyramid shape) in southern China to an elongated cone in northern China. Wrapping zongzi neatly is a skill that is passed down through families, as are the recipes. Making zongzi is traditionally a family event of which everyone helps out.

Zongzi actually emerged before the Spring and Autumn Period and served as oblation for the ancestors and gods; in the Jin Dynasty, Zongzi became a festive food for the Dragon Boat Festival. Jin Dynasty, dumplings were officially designated as the Dragon Boat Festival food. The reason why the Chinese eat zongzi on this special day has many statements. The folk version is to hold a memorial ceremony for Quyuan. From the Jin dynasty, Zongzi officially became the festival food and lasted until now.

Nowadays, there’re so many different types of zongzi you can find across China as each province develops their own unique tastes and shapes. You may find those different styles 此处.

Besides Qu Yuan committed suidcide on the 5th day of the 5th lunar month, it’s also the memorial day for Wu Zixu and Cao E.   Therefore, Tuen Ng Festival is actually a memorial day for a few of our ancestors.

Wu Zixu (伍子胥), a general and politician of the Wu kingdom in the Spring and Autumn period (722–481 BC).  Zixu, seeing the dangerous plot of Goujian, warned King Fuchai, but he did not earn the trust of King Fuchai  who became angry at this remark. The King gave Wu Zixu a sword and ordered him to commit suicide on the justification that his behaviour amounted to sabotage. His body was thrown into the river on the fifth day of the fifth month.

Cao E (曹娥, AD 130–144), her father Cao Xu (曹盱) was a shaman who presided over local ceremonies at Shangyu. In AD 143, while presiding over a ceremony commemorating Wu Zixu during the Dragon Boat Festival, Cao Xu accidentally fell into the Shun River. Cao E, in an act of filial piety, decided to find her father in the river. After five days, both Cao E and her father were found dead in the river from drowning. The Shun River was renamed Cao’e River in her honor.

Some Fading Away Traditions

Some traditional activities which were so popular and easily seen in the past have been fading away.  For example, in some areas in China, on the day of Tuen Ng, parents braid silk threads of five colors and put them on their children’s wrists.  People believe that this will help keep bad spirits and diseases away.  Other common activities include hanging up icons of Zhong Kui (a mythic guardian figure), hanging mugwort and calamus, taking long walks, and wearing perfumed medicine bags are seldom seen that in modern times when dragon boat racing has taken over much of the spotlight for the day as less and less people see it as a memorial day but a festive dragon boat race sport event.

Over the years, this ancient Chinese tradition has evolved into a modern competitive sport with international standards and sophisticated regulations.  Today, dragon boat racing is practised in over 70 countries around the world with over 50 million dragon boaters.  It has grown in popularity since the 1970s in Hong Kong.  In 1991, the International Dragon Boat Federation (IDBF) was established and set out rules and regulations governing the sport.

Since then, the IDBF organizes the biennial World Nations Championships (also called the World Dragon Boat Racing Championships, or WDBRC) and Club Crew World Championships. Unlike the Olympic Games, IDBF-sanctioned world-level championships do not require prior qualification at other elite-level competitions.

In 2007, the IDBF was recognized as a member of SportAccord (the former General Association of International Sports Federations, GAISF) which is part of the Olympic Movement, after SportAccord considered the historical and cultural backgrounds and identities of dragon boat sports.  The IDBF is not presently an Olympic International Federation of the International Olympic Committee (IOC), but the IOC is currently considering the IDBF application for Olympic Federation status.

The Hong Kong Dragon Boat Festival draws thousands of athletes from different countries every summer. One of the most iconic dragon boat events in Hong Kong is the Hong Kong International Dragon Boat Races, usually held in June. It is rather a rare sight to have dragon boats roaming the Victoria Harbour.  Events had been suspended since COVID-19.  We hope to see the situation stabilized and can resume next year.  In Hong Kong, besides joining corporate teams, there are actually quite a number of paddling teams awaits you if you are interested to practice the sports.